Prerequisite for understanding this chapter is to understand the Driver and the Device object stack in the Windows Operating System. Please read the blog (Device Object and Driver Stack (Part 1).
In this blog we start with understanding the Windows IO Model. Then we proceed to discuss some more detail about the I/O system and how it interacts with the layered driver structure to service a request. Request is created by a client (can be application, any kernel subsystem like PnP manager or another driver) and is processed by the destined driver. We will see that these requests are represented as packets, aptly called I/O request Packets (IRPs). Finally we brief about how the IO moves from an application through the system and the device stack to complete this IO Request.
In the next blog we will take a look at the code and the structures that are associated with what has been discussed in last two chapters.

I/O manager has been briefly described in the Kernel subsystems section in the blog: (Windows Driver Fundamentals)
I/O system defines the orderly framework or model within which I/O are delivered to device drivers. As mentioned earlier, I/Os are represented by an I/O request packet (IRP), which travels from one I/O system component to another.
An IRP is a data structure that contains information completely describing an I/O request. The I/O manager creates an IRP in the memory to represent an I/O operation, passing a pointer to the IRP to the correct driver and disposing of the packet when the I/O operation is complete.
A driver receives an IRP, performs the operation the IRP specifies, and passes the IRP back to the I/O manager, either because the requested I/O operation has been completed, or because it must be passed to the another driver for further processing.
In addition to creating and disposing all the IRPs, the I/O manager supplies code that is common to different drivers and that the drivers can call to carry out their I/O processing. By consolidating common tasks in the I/O manager, individual drivers becomes more simpler and more compact.
I/O manager also manages buffer for the I/O requests, provides timeout support for the drivers, and records which installable file systems are loaded into the operating system.
The uniform modular interface that the driver presents allows the I/O manager to call any driver without requiring any special knowledge of its structure or internal details.
Drivers can also call each other (using I/O manager) to achieve layered, independent processing of an I/O request.

The following are the most common types of the I/O requests issued from the application:


The standard Windows functions that application use to issue these I/O requests are WriteFile, ReadFile and DeviceIoControl respectively.
We will examine the IRPs including different I/O transfer types in details in the upcoming blogs. For now, this general information will suffice for understanding.

How a Device Stack Handles IRPs.

When a client sends an I/O request to a device, the I/O manager packages the request and related information such as data buffers into an IRP. The I/O manager locates the pointer to the appropriate dispatch routine in the top device object in the stack and calls the routine and passes the IRP to the associated driver for processing. 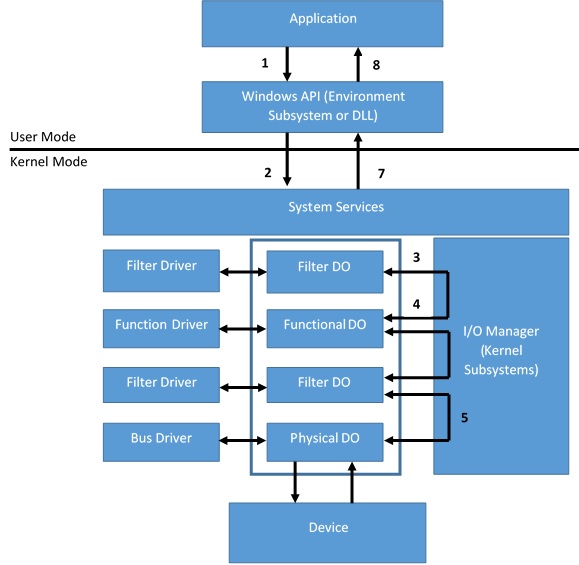 I am following the given resources: